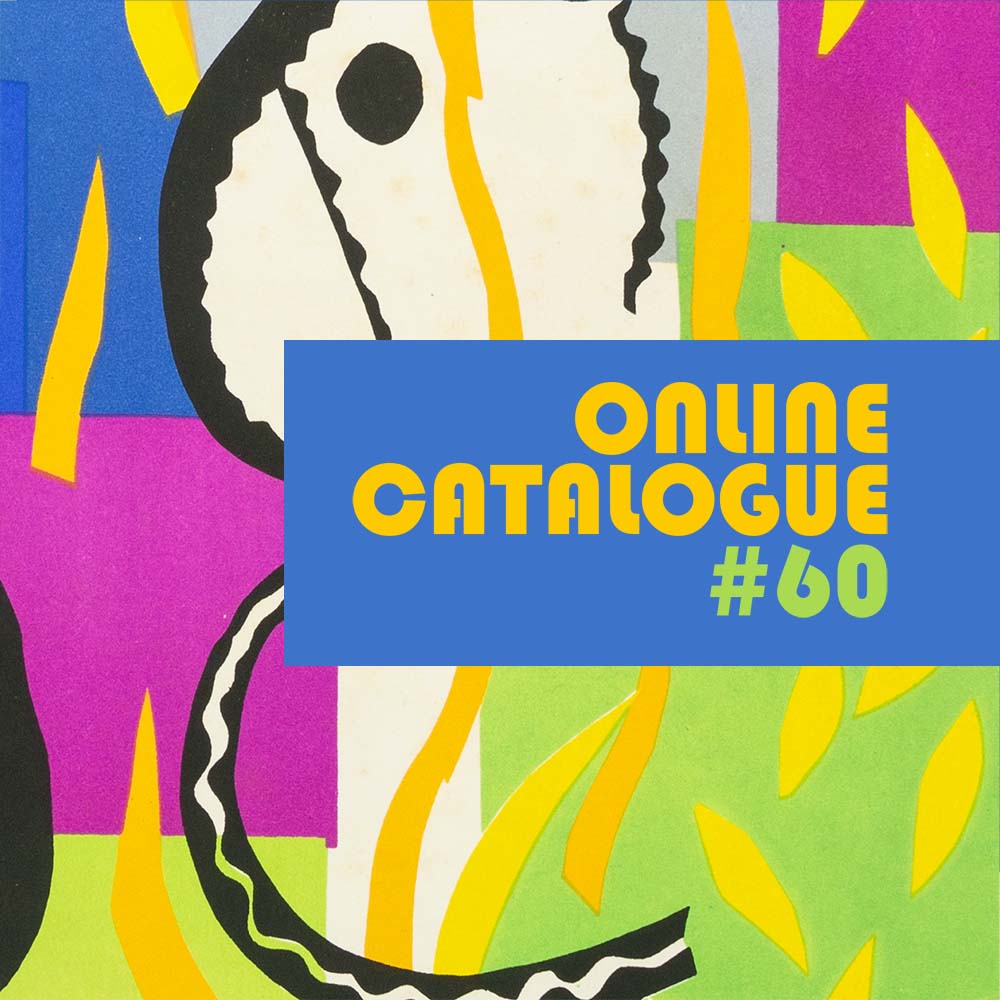 Our first catalogue for 2022 contains some very appealing rarities: an American Civil War muster roll; eight issues of Verve (containing numerous original lithographs by the likes of Bonnard, Braque, Chagall, Derain, Giacometti, Klee, Léger, Matisse, Miro, and Roualt); Stoddart’s presentation copy of the Australian Cricket Annual 1896-7; the first edition of T.S. Eliot’s Old Possum’s Book of Practical Cats (with the dustwrapper); a 1930 autograph letter signed by Aldous Huxley (with very interesting literary content); rare examples of Indigenous Australian portraiture; a fine copy of the golden jubilee edition of Winnie-the-Pooh (one of only 300 copies signed by Christopher Robin himself); and an album of 87 large-format aerial photographs of New Guinea, circa 1943. 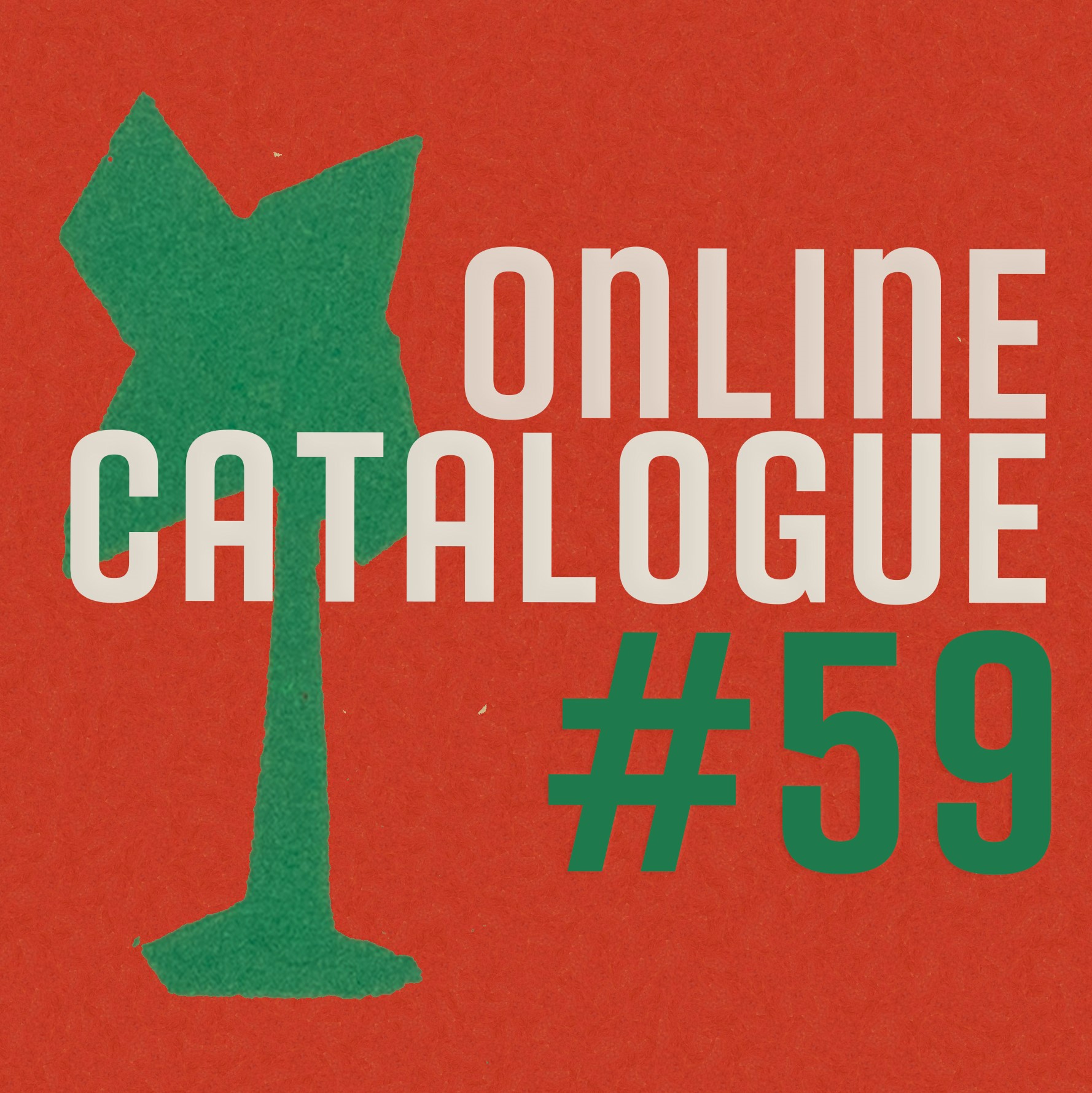 Many of the highlights in our latest catalogue are to be found in the lengthy section on Australian Modernism at the beginning of the list. There are numerous elusive ‘little magazines’, such as complete runs of Comment, Angry Penguins, Angry Penguins Broadsheet, Ern Malley’s Journal, Art in Australia (all six Series 4 numbers), and Manuscripts. There are also substantial runs of even rarer titles, such as Barjai, Pandemonium, and Tomorrow. Sidney Nolan is well represented, with two books containing original artwork, and another lot containing over 80 items with cover artwork by him.

From anti-heroes (think Ned Kelly and Ern Malley) to heroes: we have signatures of seventeen men awarded the Victoria Cross; numerous accounts of the adventures of Biggles himself; and a stirring poster featuring Condoman (definitely a man of action).

All this and more – with our compliments of the season!

Our latest catalogue includes two very rare items that are parochial in the extreme, but by nature of universal appeal to collectors. The album of photographs by Freeman & Wivell, prepared for the 1876 Philadelphia Exhibition, contains 20 large-format stark and monumental ‘architectural portraits’ of the city of Adelaide. The mammoth hand-coloured wall map of the settled portions of South Australia, prepared by Sanders & Packard, Surveyors, in early 1886, appears to be unique.

Among other important items of literature are first editions of Katherine Mansfield’s first book, In a German Pension (1911); the third and fifth volumes of C.S. Lewis’s The Chronicles of Narnia series, as well as his Till We Have Faces (1956); and T.S. Eliot’s Animula (1929, one of only 400 copies of the signed large-paper edition). The signed deluxe edition of Gifford Chapman’s Kangaroo Island classic, Wooden Fishing Boats (1998) is arguably rarer than Fenner's much earlier Pocket Atlas of Modern & Ancient Geography (1828, with 79 hand-coloured maps), but horses for courses …

Less rarified, but no less interesting and definitely as eclectic, items include numerous volumes in the Legal Classics Library series; a selection of Bluey and Curley annuals; assorted trade catalogues and other printed ephemera; and a handsome gold medallion awarded to Joseph Watson, a member of the Port Adelaide Football Club’s team declared ‘Champions of Australia’ in 1913.

Down tools or drinks for twenty minutes and enjoy the catalogue! 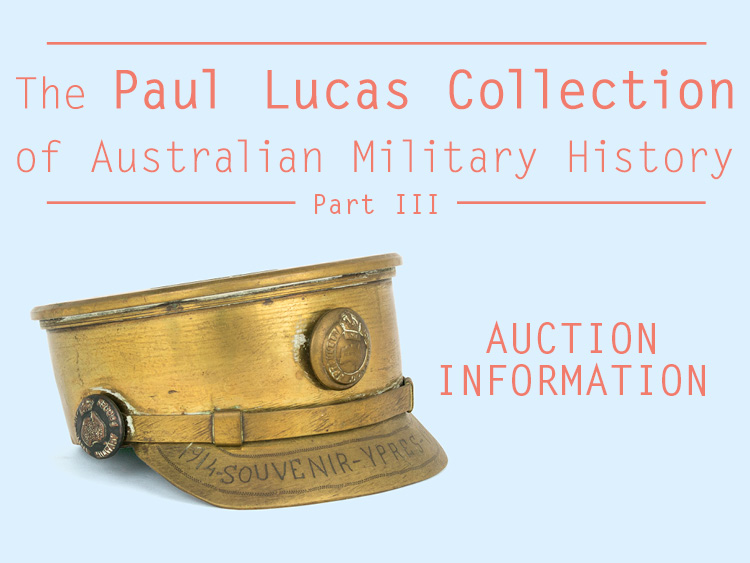 The third sale of material from the Paul Lucas Collection contains a most interesting miscellany, rich in the ephemeral.

Many of these lots, if not unique (letters, diaries, trench art, sweetheart jewellery), or uniquely provenanced (personal awards, documents), were produced in extremely limited numbers (photographs, menus, programmes), occasionally under wartime conditions (items printed in the field or at sea).

We couldn’t resist including a choice non-Australian item, for the same reason Paul couldn’t resist including it in his collection. Lot 9 is a superb four-page letter written by a young Lieutenant John Gurwood in June 1811 from Lisbon where he was recuperating from a severe leg wound sustained in the Peninsular War. He later achieved lasting fame as the editor of the Duke of Wellington’s Dispatches.

This is an online-only timed auction. Beginning at 2 pm ACDT on 30 October, lots will begin to close sequentially at intervals of 30 seconds.

All items are available for viewing at our North Terrace premises. However, for the majority of you who are not Adelaideans and for whom personal inspection is not an option, all items are accurately described and photographed, and are covered by our conditional guarantee.

Please ensure you have read the Conditions of Sale before bidding. 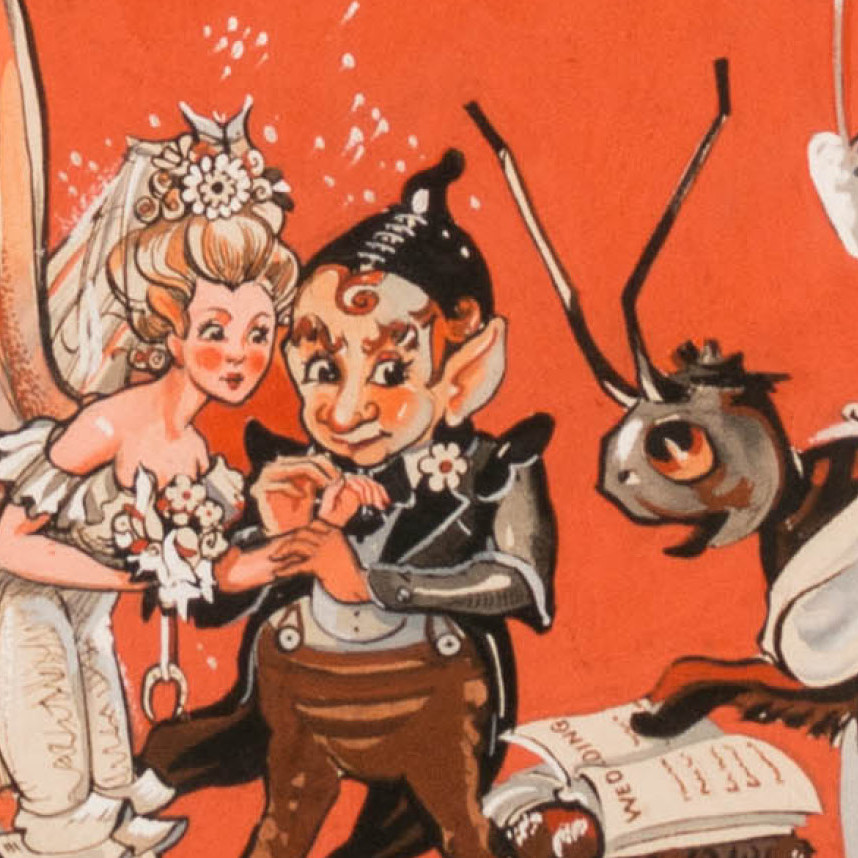 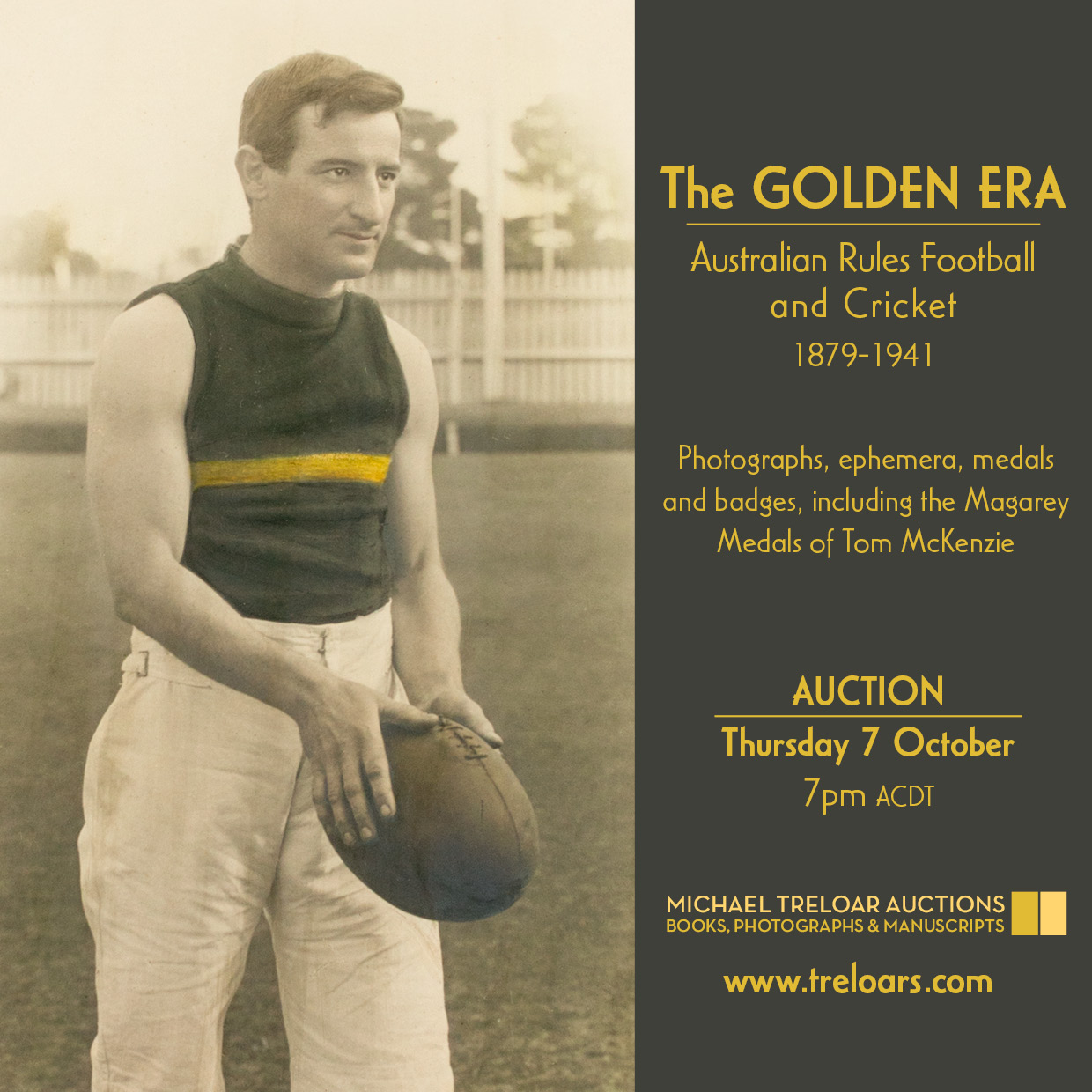 Photographs, ephemera, medals and badges, including the Magarey Medals of Tom McKenzie.

There will be no in-room bidding for this sale, but we offer flexible options for remote bidding:

Leave your maximum bids online at any time (the auction platform will bid for you against competing bids);

Bid live by telephone on lots with a minimum lower estimate of $500.

Click on each lot to see a full description and additional images.

All items are available for viewing at our North Terrace premises. However, for the majority of you who are not Adelaideans and for whom personal inspection is not an option, all items are accurately described and photographed, and are covered by our conditional guarantee.

Please ensure you have read the Conditions of Sale before bidding. 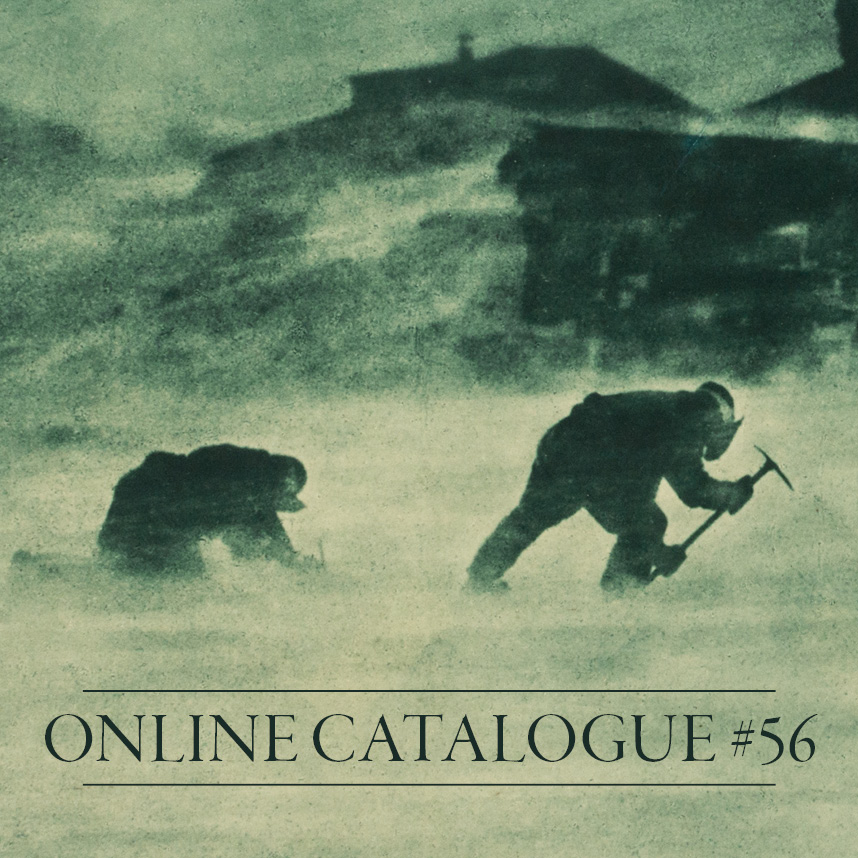 The cover illustration to our latest catalogue – an image emblematic of the times? – is ‘The Blizzard’, one of seven vintage photographs by Frank Hurley from the Australasian Antarctic Expedition, 1911-1914 we have for sale. Other important photographic items are the Royal Photographic Society’s 1932 portfolio, Pictures from the Tyng Collection, containing six fine photogravures, including ‘Bewegungs Studie (Study of Movement)’ by Rudolf Koppitz; and Richards’ New South Wales in 1881 (1882), containing 24 high-quality autotypes produced in Australia (and very rare thus).

Private press and art books are well-represented: among them are The Lithographs of Chagall (five volumes, 1960-1984), complete with all 28 original lithographs as called for; Delteil’s 1923 volume of catalogues raisonné of etchings and lithographs of Camille Pissarro and Auguste Renoir, containing an original etching by each artist; Flaubert’s Hérodias, one of only 226 copies printed at the Eragny Press of Lucien and Esther Pissarro, with their illustrations; and a superb exemplar from the Ashendene Press, Ecclesiasticus (1932, one of 328 copies).

There are plenty of other items, selected as ever for being interesting, unusual, quirky, or in some cases, just plain expensive. 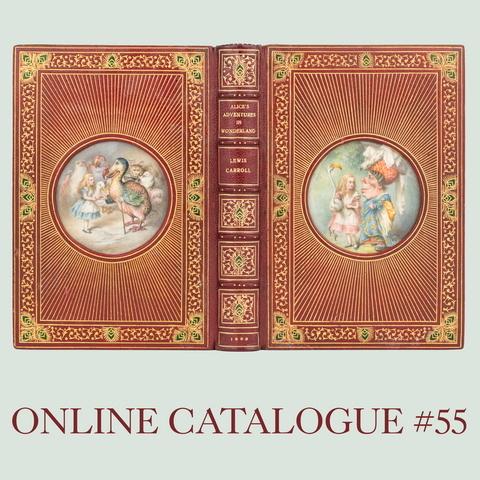 Our copy of Alice’s Adventures in Wonderland may be just one of the 12,000 printed in the two years after it first appeared in 1866, but the exquisite double Cosway binding it received some forty years later makes it unique – and uniquely desirable. In the same league, we have an original South Australian land grant for Town Acre 558, issued to Osmond Gilles in December 1837, less than a year after the colony was established. At the time, he was also the Treasurer and one of the largest land speculators in the province!

Indigenous Australian history includes a copy of The London Chronicle for 6 April 1789, containing one of the earliest accounts of the indigenous inhabitants of the Sydney region; Spencer and Gillen’s The Native Tribes of Central Australia (1899, signed by both authors); and two nineteenth-century portrait photographs.

Of course, there’s much more!